We use cookies to improve your user experience. More information
SuccesstoriesSponsorship Successtory - 3 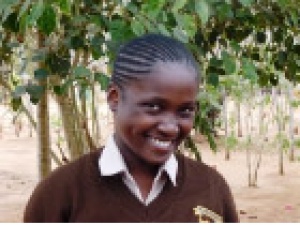 I grew up with in the midst of a lot of children in our extended family. None of us knew who had parents and who had not because we all shared all the facilities there were. It would only come to our knowledge that some of us in the family did not have parents when we had to join secondary school. to cut a long story short, I was lucky to have sponsorship through Verkaart education project and was admitted to kwale girls. In Kwale girls I had a chance to meet the president America and that will remain a highlight in my life. I am grateful Verkaart dev. Team AND MY PERSONAL SPONSOR ANGELO CILLEKENS gave me a stepping stone towards this.

Our principal madam Bahati got an email from the American embassy stating that three girls accompanied by a teacher from Kwale girls are invited to attend to president Barrack Obama speech at Nairobi. Two accompanied by a teacher at Kasarani stadium and one at Kenyatta University. Luckily I was among those who were chosen and lucky enough I was to attend to his speech at Kenyatta University. We were all happy for this because it was a dream come true and immediately the necessary arrangements
were made.

On the departure day, the three of us and our teacher left for Nairobi early in the morning an reached in the evening. We were all anxious for the next day. we spent our night at sand ton city hotel I was so happy because I had never been in a luxurious hotel like that one before.

We took our supper and rested for the journey was tiresome. The following day we were picked early in the morning since the traffic jam would be unbearable if we delayed. we first went to Kasarani stadium to drop the two and the teacher.
many people of all walks of life filled the area as they awaited for the gates to be opened. we saw the gates were delaying us so the three had to be dropped there and I had to be taken to Kenyatta university

I was dropped all alone at the vast university and the taxi left. The school was big ,the students were all over and I did not know which way to go, I stayed stranded for a while butlater started asking directions from the students where the Chandaria hall was until I found it, but then I was told it was still early and had to wait a little longer, so I hanged around watching the securities officials take their position in ensuring security until the stated time reached

At the gate were the media people and security guards, we were thoroughly inspected and let into the room. I was jovial but shy since I was the only student then three others came later ,the rest were senators’ CEOs and top officials of known organization. I was delighted to be around them. I gained courage and talked to some of them before we were interrupted and told that the president was on his way and we were to prepare. I sat at the front seats having a question to ask him

Eventually the waited president arrived, I got tense for I thought it was not true. He greeted us and began his speech mainly about entrepreneurship; later on the floor was open for questions. Unfortunately some of us me included could not ask our questions since the president did not have enough time. I was disappointed though but I was glad to see and listen to his speech more so take a picture with him

We all left the room and outside there was full to capacity, I felt so proud of myself as I
walked through the red carpet out of the hall. As I was waiting for the beast, the president car, the university students surrounded me asking me endless questions like, how was I chosen, how was the selection, what the president talked about among others. Finally the beast passed after several security cars passing before it. It was really a nice car, one of its kind.

I therefore left to meet my colleagues who had already attend to his speech and were waiting for me outside the outside the university, together we left for the hotel, prepared ourselves for departure and left for school. I wished I could return that golden moment but it was Impossible either way.

Since then I have known everything is possible because who could have thought a girl like me could see president Obama, it was a great pleasure and a blessing to me and I pray more opportunities like this one to some again.